Home > Curiosities > Effects of the air pressure, temperature and humidity in kitesurfing

Effects of the air pressure, temperature and humidity in kitesurfing

A lot of time you can hear on a kitesurfing spot comments like: “today the air is full of humidity, so it is heavier and the wind pushes more” or “on the Red Sea the density of the air is low, while here on the North Sea is higher so 20 knots there push the same as 16 knots here” and so on.

It would be interesting to find out how our kitesurfing experience can change due to climatic differences so let's try to figure out some plausible numbers. 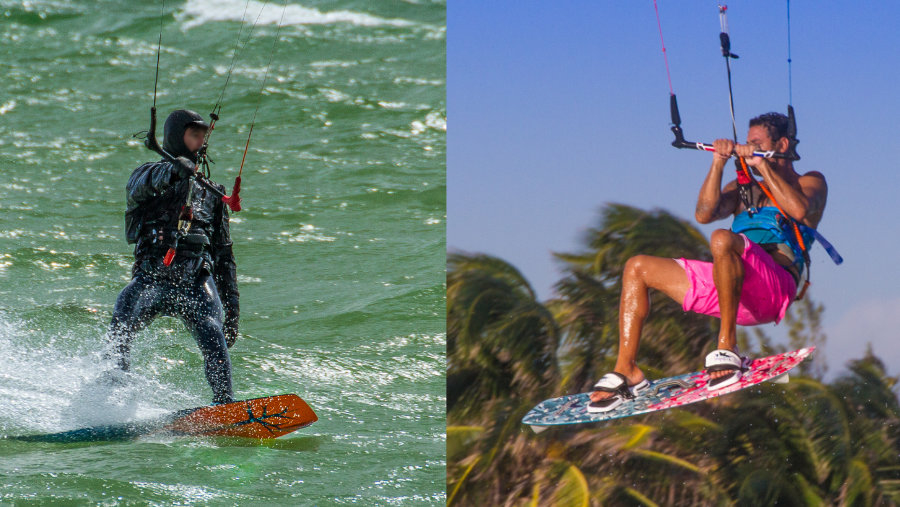 To be able to clarify our ideas on the topic, we need to dig a bit in some physic and play with some formulas, let’s see how fun it can be…

If you stongly dislike to dig into math and phisics, just skip the all calculation part and head to the bottom of the post, where you will find a resuming sketch of what we found out (click here).

For sure the majority of kitesurfers have seen some kind of wing aerodynamics representation, showing how a wing, in the specific a kite, ideally works.

The lift of this ideal wing is given by the formula:

The kite’s lift more or less follows this rule, with some adjustments. The parameters of surface (S) or Lift coefficient (CL) change depending on the kite and on the use of the depower that changes the angle of attack, so they are not involved in the evaluation of the ‘climatic’ parameters. The velocity (v) comes into play as an amplification of the total lift effect but, as the previous parameters, it isn't involved in the evaluation we are trying to do.

The real player here is the AIR DENSITY

Air density is influenced by pressure, humidity, and temperature. Let’s analyze the first two in relation to the third (temperature)

The air pressure depends on the climatic situation, the altitude, and the temperature. To simplify the problem let's avoid considering the changes derived from the local weather conditions, which can be neglected as they produce minor changes to the pressure, unless we are in a very deep low pressure weather system such as a hurricane, in which we normally don't kite.

So we will be considering only substantial changes in the pressure due to the altitude. In this case, the pressure varies following this formula:

Applying this formula, we can have a rough idea of the behavior of the pressure depending on the height on sea level, and on the temperature: 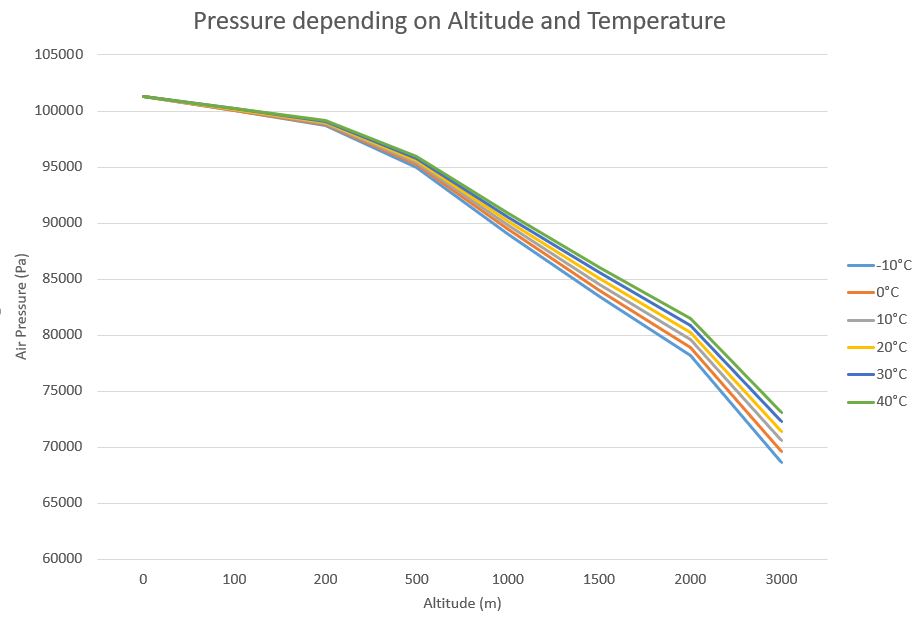 Now we are able to calculate the pressure effect on the kite lift,  by giving a look to the density values according to the pressure at a specific altitude. If the air is dry, the density formula is pretty simple:

Using this formula, finally, we have the graphical representation of the behavior of the density of dry air in relation to altitude (pressure) and temperature: 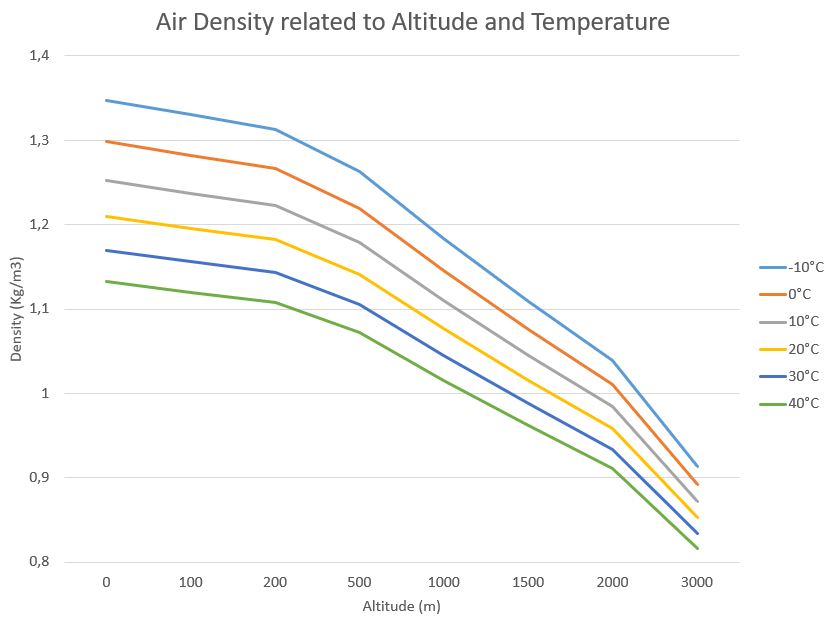 This shows how altitude and pressure influence the density of the air and that the temperature has also a significant effect.

At the same time, the increase of temperature on steps of 10° leads to a reduction around the 5% each step.

Above we found the dry air density calculation, here let’s consider now the humidity in relation with the temperature.

If the air is moist (the normal case for kitesurfers), the calculation becomes a bit more complex, and we need to take into account the amount of water vapor in the air. On the contrary of what many kiters think, water vapor is relatively light compared to diatomic Oxygen and Nitrogen, therefore more moist air will result in lower density, so less kite lift.

Skipping on all the combined equations (for whoever interested, they can be found as an easy example Here), the moist air equation results in this:

Simply put, the higher is the Humidity percentage (keeping pressure and temperature constant), the lower becomes the density.

This equation also shows the link between the pressure, the temperature, and the humidity.

Let’s think about what this formula means: the bigger is the denominator of the fraction T(1+1.609x), the smaller becomes the density, therefore, the kite lift. But we can notice that the T plays a major role in the growth of the value, while the humidity ratio (x) influences the density only by a 0.609 multiplied by T factor. Therefore, we can expect that the air temperature plays a way more important role than the humidity.

In fact, after applying that formula to different cases, we can see that the effect of the humidity starts to be relevant at high temperatures as this graphic of the normalized density shows: 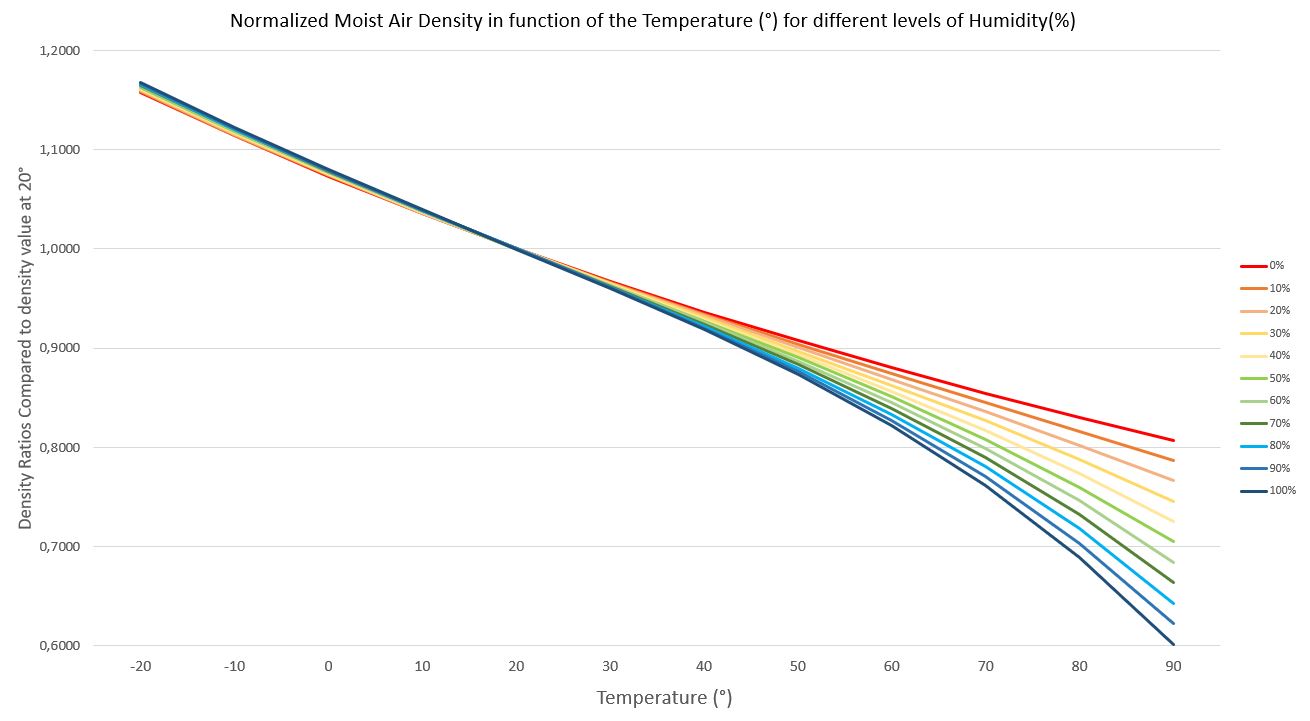 If anyone is interested in the numbers, the calculated values of density, on which the graph was created are these:

This shows that in the range of normal temperatures of kiting, between let’s say 0° and 40° only the temperature produces a sensible difference.

But how much is this difference for kitesurfers?

Evaluating the parameters S and CL in the Lift formula is out of the scope of this post and would require even experimental tests for any kite we would like to check, but since the lift is a linear function of the density, we can very easily try some numbers.

Let’s assume that at 20° we receive, from our beloved power-kite, a pull of 100kg, that value would vary according to the following table.

Considering a range from 0° to 40° the difference in the lift generated changes, depending on the air Humidity, between 13,71 and 16,19 Kg on a pull of 100kg at 20°. That means an excursion up to 16% of the kite pull between the two extreme temperatures. A not neglectable effect.

It is also interesting to notice the humidity effect (even though practically not significant in the performance outcome for the range of temperatures in which a kitesurfing session takes place): the higher the humidity %, the bigger the difference in the lift intensity at various temperatures. That is mostly explained by looking at the density graph. At lower temperatures the density curves of different humidity levels are overlapping, meaning that the moisture has no effect. Starting between 30° and 40° they increase their gradient and separation due to the humidity %. That effect is the reason for that 3% of the difference in the kite lift at higher humidity rates.

In the end, even though this was more of a fun exercise than a rigorous calculation and for sure will raise numerous very justifiable criticisms, we can conclude that the pressure and the temperature play the main role in the difference of the lift from the kite, while the humidity % tends to be way less relevant.

To summarize and visualize our results we created this funny and completely inaccurate table: 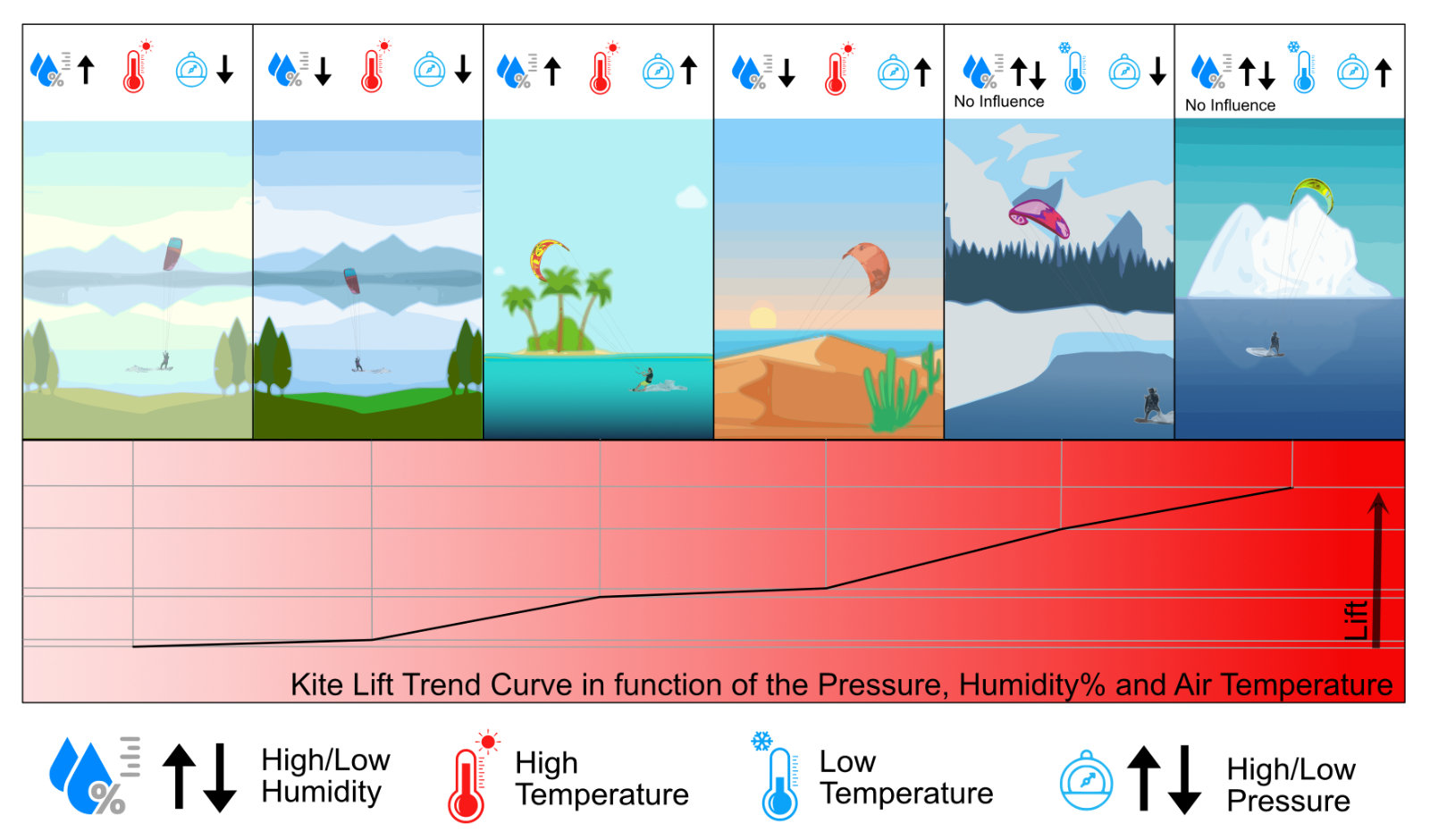 What do you think? Was it interesting to play with this?

Please participate and let our community know your opinion in the comment below!

Clearly a lot of effort has gone into this so thank you for this post. My beer addled brain is trying to comprehend it. I was just chatting with somebody about the whole cold air thing, and was wondering if it really had any real noticeable difference. The 20° Table was quite interesting. It was around 10° today. So in theory I had a 3ish% advantage over my sessions in September.

Thank you Andy for your comment! Yes, you got it pretty right. The change of temperature on the density is more influential at temperatures below 20 deg. while above that limit humidity starts playing a strong role also. I agree with you that this 3% is probably difficult to be noticed, in borderline situations might make a difference though.

Really useful information. Thank you so much.

Thanks, Tuncay, very happy to hear that you find the info useful! 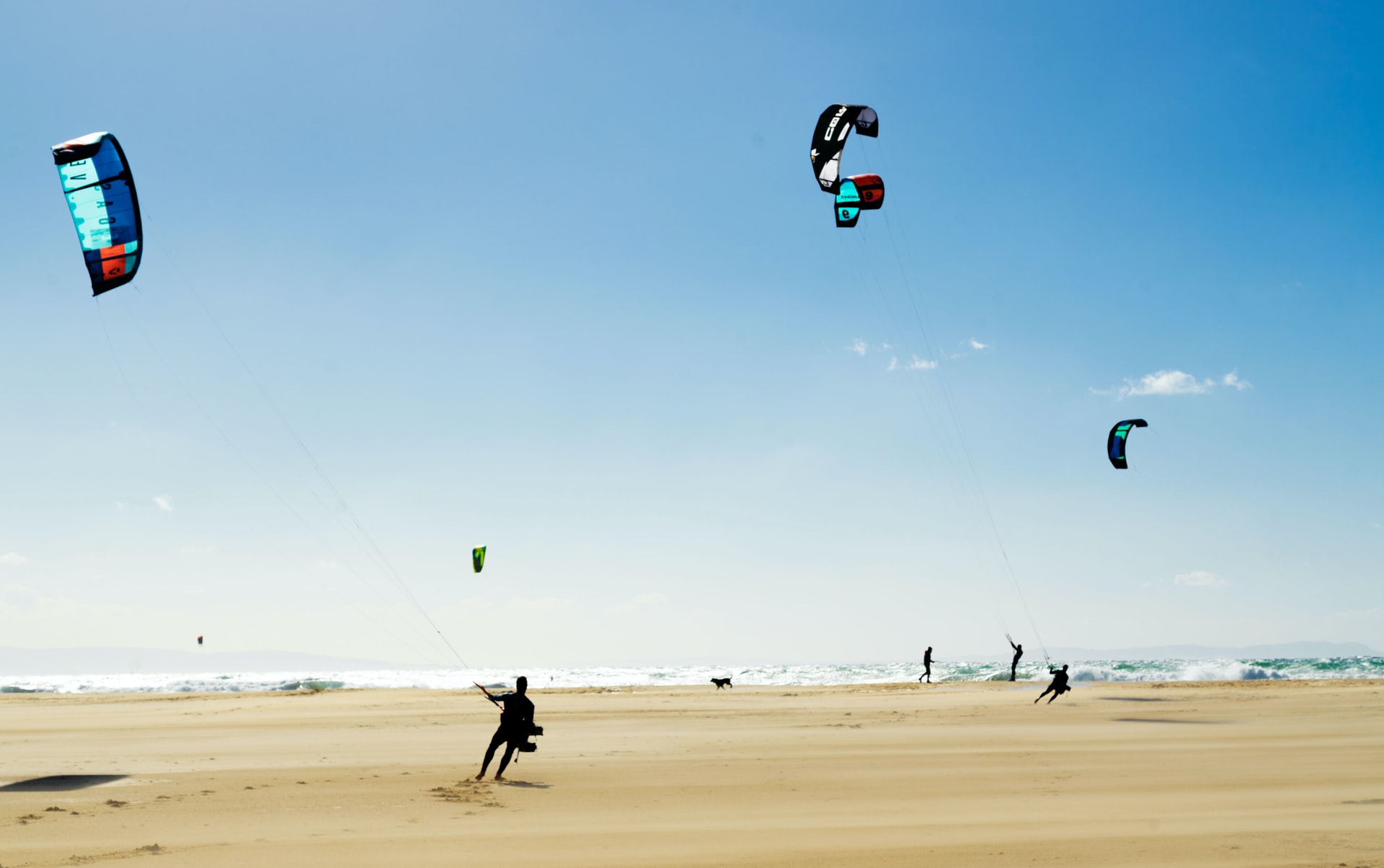 What you need to know before going kiting to Tarifa.