Retrieve your kiteboard after falling with confidence and in the shortest time following this advice.

If you want to be an independent rider after finishing your kite course, mastering the body-drag upwind is fundamental. If we analyze what being independent means, we can roughly resume it with: being able to set your kite, launch, and land it safely, being able to handle emergencies and self-rescue techniques, and have the capability to go out and come back on the shore from the same point with all your equipment. This statement does not even involve being able to stand on the board, in fact, you could just body drag back if you can go upwind. Now, think about those situations when the wind drops and you can’t ride upwind with the board, and you’ll have a clear idea of how fundamental the knowledge of this technique is.
Mastering the body-drag upwind lets the kitesurfer quickly and effortlessly retrieve the kiteboard after falling and losing it from his feet. The faster and shorter the time spent in body-dragging, the more energies we can save for actually riding, jumping, and having fun. We all know how exhausting is to stay in the water trying to catch the board falling upwind of our position.
To help perfect your ability to body-drag upwind and optimize the kiteboard retrieval, you should pay attention to the following tips.

1. The angle of attack in the body drag

This is by far the most important element in trying to achieve a fast upwind and it is the key to success. We call it ‘angle of attack’ because similarly to a sailboat, the relative angle between the direction of the body and the wind determines the performance of the upwind. 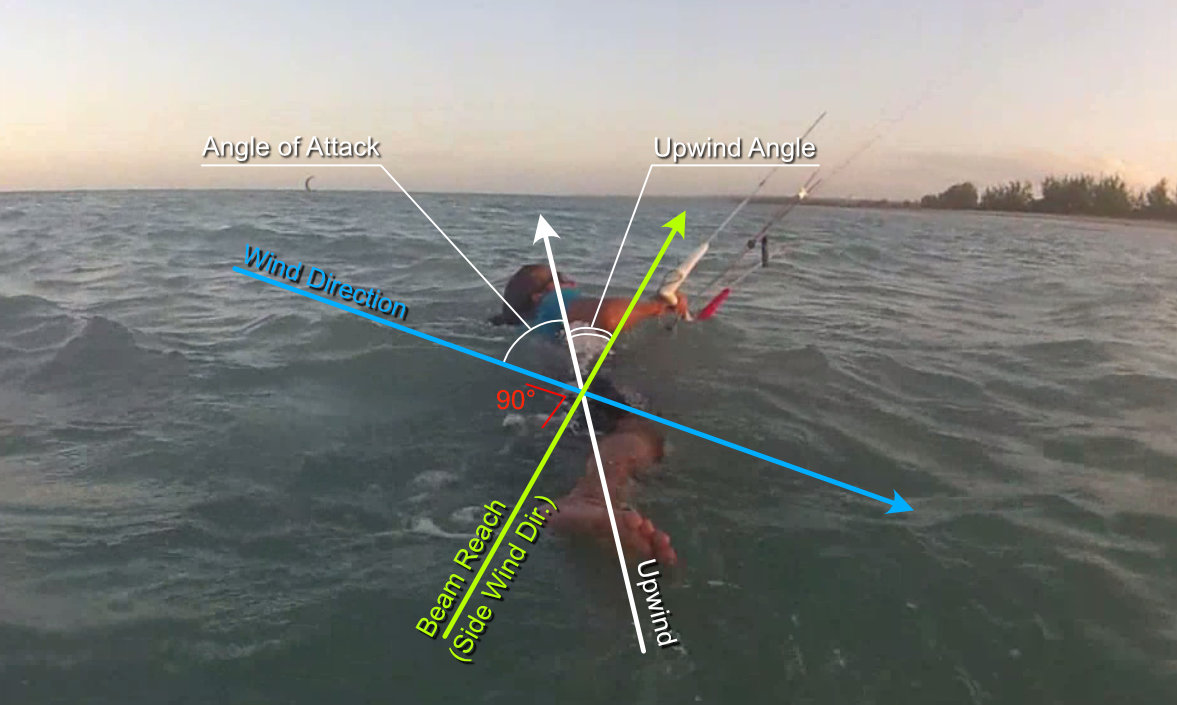 The bigger the angle of attack, the less upwind we go and the closer we get to just body-drag sidewind or, even worse, downwind.

The smaller becomes the Angle of Attack (therefore bigger becomes our upwind angle) the steeper is our upwind, but also the more we get closer to the critical angle. Beyond that angle we simply ‘stall’ our body drag tack and we start losing our upwind position, drifting downwind. 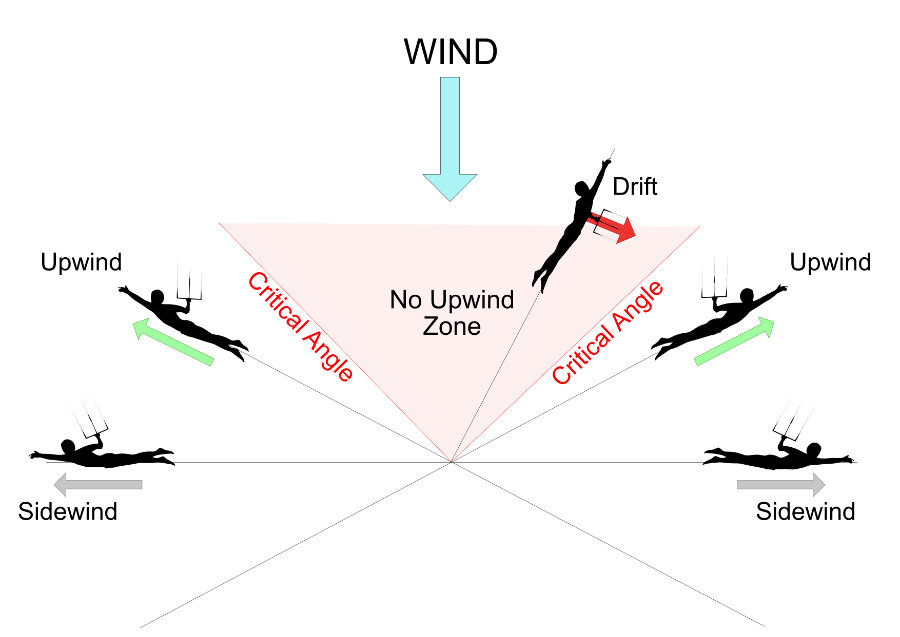 For a standard sailboat, the angle of attack can be as small as 30°, but for the kitesurfer’s body, the critical angle is way broader due to the higher resistance it offers to the advancement in the water. The critical angle can probably be quantified around 60°.
Even without knowing its exact value, it is very easy to understand when we passed the critical angle during our body drag: instead of feeling a steady stream of water flowing along our body from the front hand to the feet, we start experiencing the pressure of the water going more or less perpendicularly tour body, from the direction where the kite is, and we have difficult to hold the front hand straight together with the body position since it is pushed by the water.

The solution to this situation consists just in pointing in a more downwind direction, making sure we still go upwind, and we will immediately feel the change in the water flux and the sudden increase in speed of our body drag.

2. The kite position and bar depower

The optimal kite position should be around 45° because it produces pull in the desired direction plus it provides an uplift component that helps the kiter to hold his balance in the water, especially at the beginning of body-drag upwind learning.
When the rider has not yet a smooth control of the kite and the body in the water and tends to wrongly pull on the bar to get that ‘extra’ stability, it is helpful to consider slightly lower angles in the kite position, to avoid the kite to undesirably cross the twelve going to the opposite direction. That would create significant drift downind. 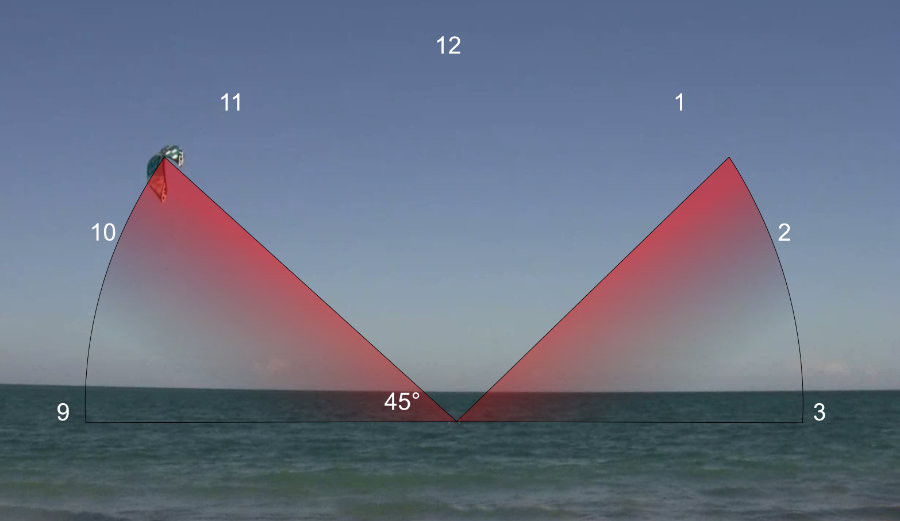 On the extreme, with good enough wind, it is preferable to have the kite going lower and even touching the water, since it will still provide propulsion in the right direction. That would allow recovering the kite position up at 45°, once gained back some balance.
For beginners. the pull on the bar depower should be enough to generate nice and smooth propulsion for our body drag. It is inadvisable to increase the pull further since the kite would become way more reactive to any involuntary steering action

When we need to change direction, we must move the kite as slowly as possible to keep it always very close to the border of the window. This helps to minimize the drag downwind while we switch from one side to the other because we avoid putting the kite in the power zone. 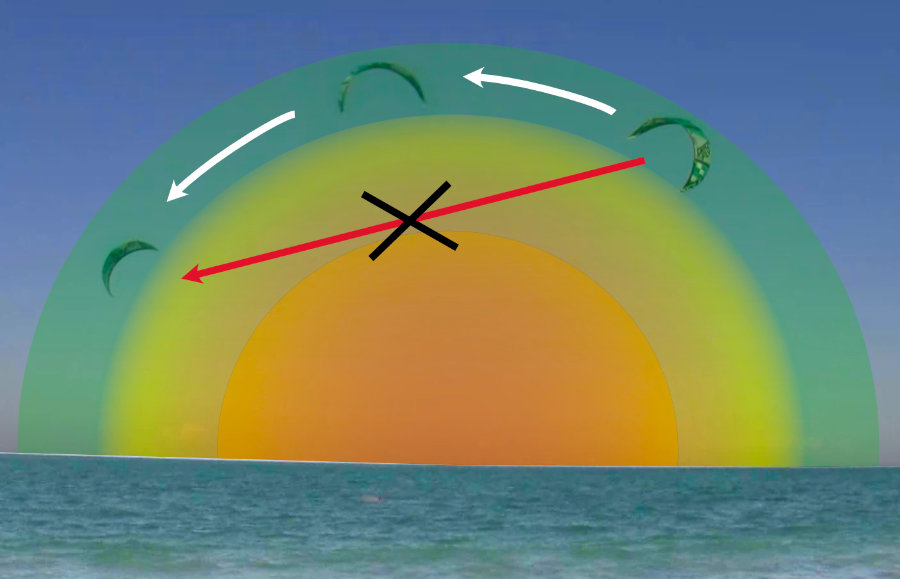 In reality, whenever we change direction, we tend to lose some distance we conquered upwind, but if we avoid putting the kite in or close to the power zone, we minimize that loss. In the following image, we can see how our trajectory in the water is, during every tack and every change of direction, in the case of slow kite movements and fast abrupt ones. 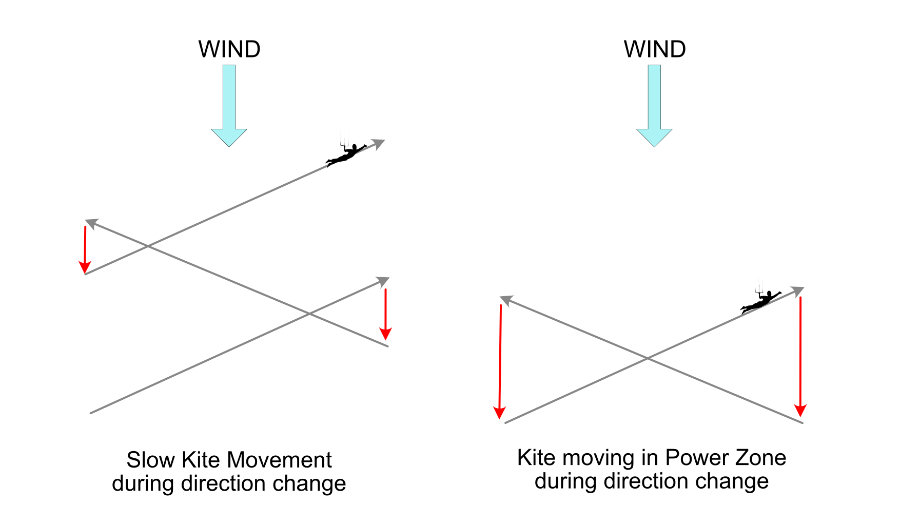 On the opposite, while the kite is passing over us, we need to change our body position fast enough to be set in the opposite direction when the kite starts its pull on the new side.

4. The body in the water must be kept as close to vertical as possible

This improves the efficiency of our body to behave like a fin in the water. We don’t need to go strictly for the perfect vertical position, and we’d better find a comfortable mediation between vertical and inclined one.
If we stay horizontal on the water with our shoulders and with the body, we lose efficiency in our body drag with more drag and the need for a larger angle of attack during the upwind tack. 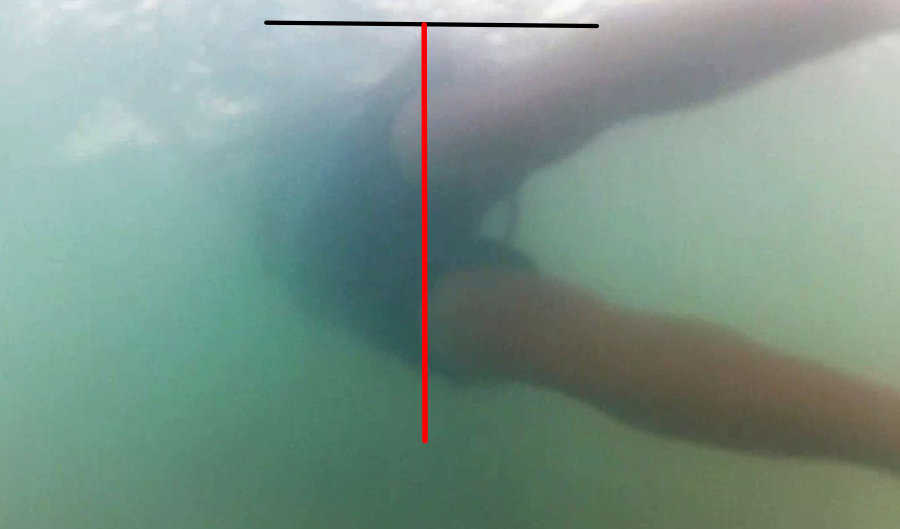 5. Don’t change direction too often during the upwind

Most inexperienced kiters tend to change direction quite often in order not to lose contact with the board since they are not completely confident in finding it when getting too far. In this case, a tool like the one explained in this post could help them to enhance its visibility.

7. Don’t try to reach the board by swimming backward when close

A lot of riders get tempted to swim backward when they are in the vicinity of the board. It might seem a couple of meters can be easily overcome by swimming, but the kite attached to us will keep pulling downwind, making this effort way heavier than expected. Better keep going with the body drag until we reach the board or even end up upwind to its position and coming down on it still using the power of the kite instead of the effort of our arms. 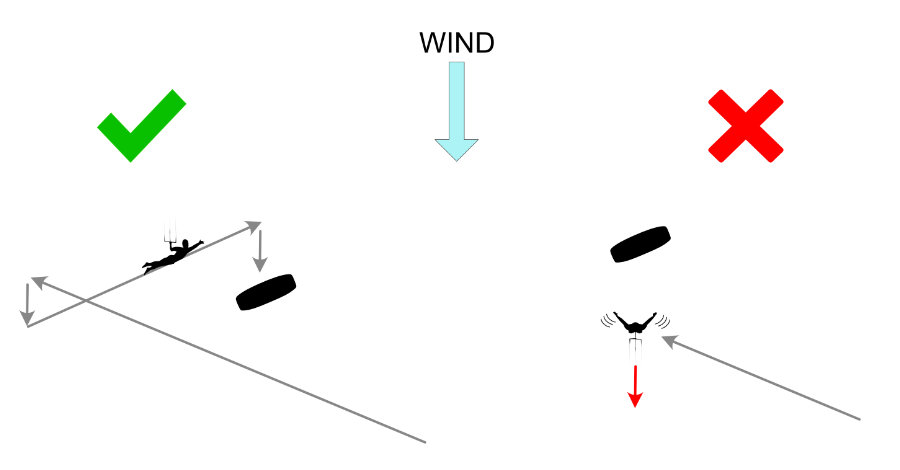 What do you think of this tips? Do you have better ones? Feel free to share them with us in the comments below.


The ability of a kite to drift and when it is important.

Safety Kitesurf Hook Knife, a must to have in your sessions


The ability of a kite to drift and when it is important.

Safety Kitesurf Hook Knife, a must to have in your sessions


When your kite becomes a flying piece of art