I’ll always be grateful to my great friend Carlo Macchiarulo, the owner of IL PIRATA resort in Pemba and founder of Kitesurfing Mozambique, a real Mozambique’s kiteboarding pioneer, who last summer organized the best full moon kitesurf session I have ever taken part of.
First of all, let me say that Murrebue beach, where the event took place, was one of the greatest kitesurfing spots I had ever seen in my kiter’s career. You can read in detail about it in this post. For now, I will just give some hints: hip-high flat warm water, surrounded by white sandbanks in low tide, safe sandy bottom, a reef that prevents the entering waves from creating choppy water, and steady seasonal trade winds, normally blowing from 14 to 20 knots, with peaks of 25 to 30. 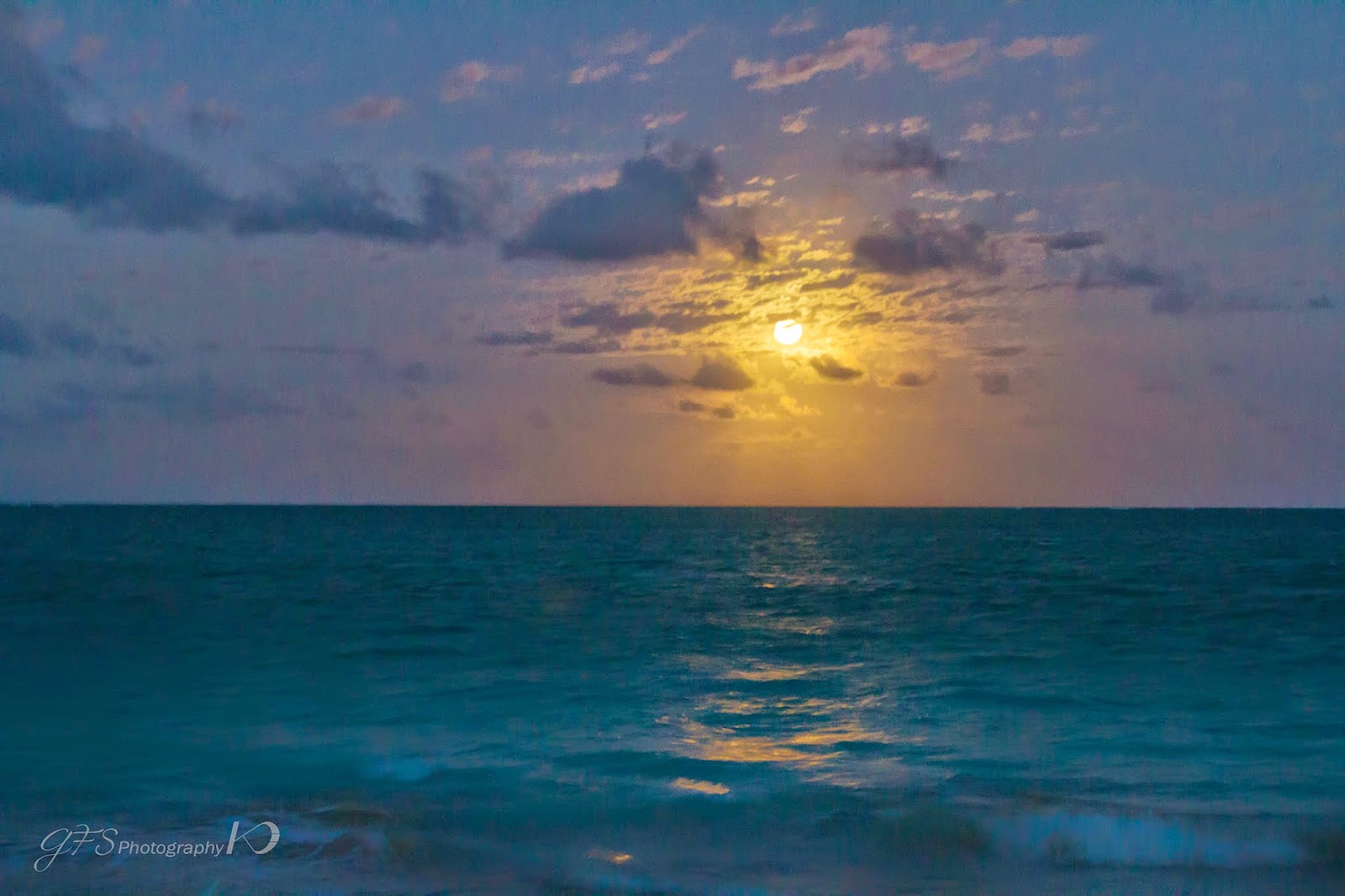 Five participating kiters were: me, Carlo, a great local kiter Bart, South African airplane pilot Cameron, who practices kiteboarding whenever he has a chance, and Ines, the girl of the group, who used to be my kitesurfing student. 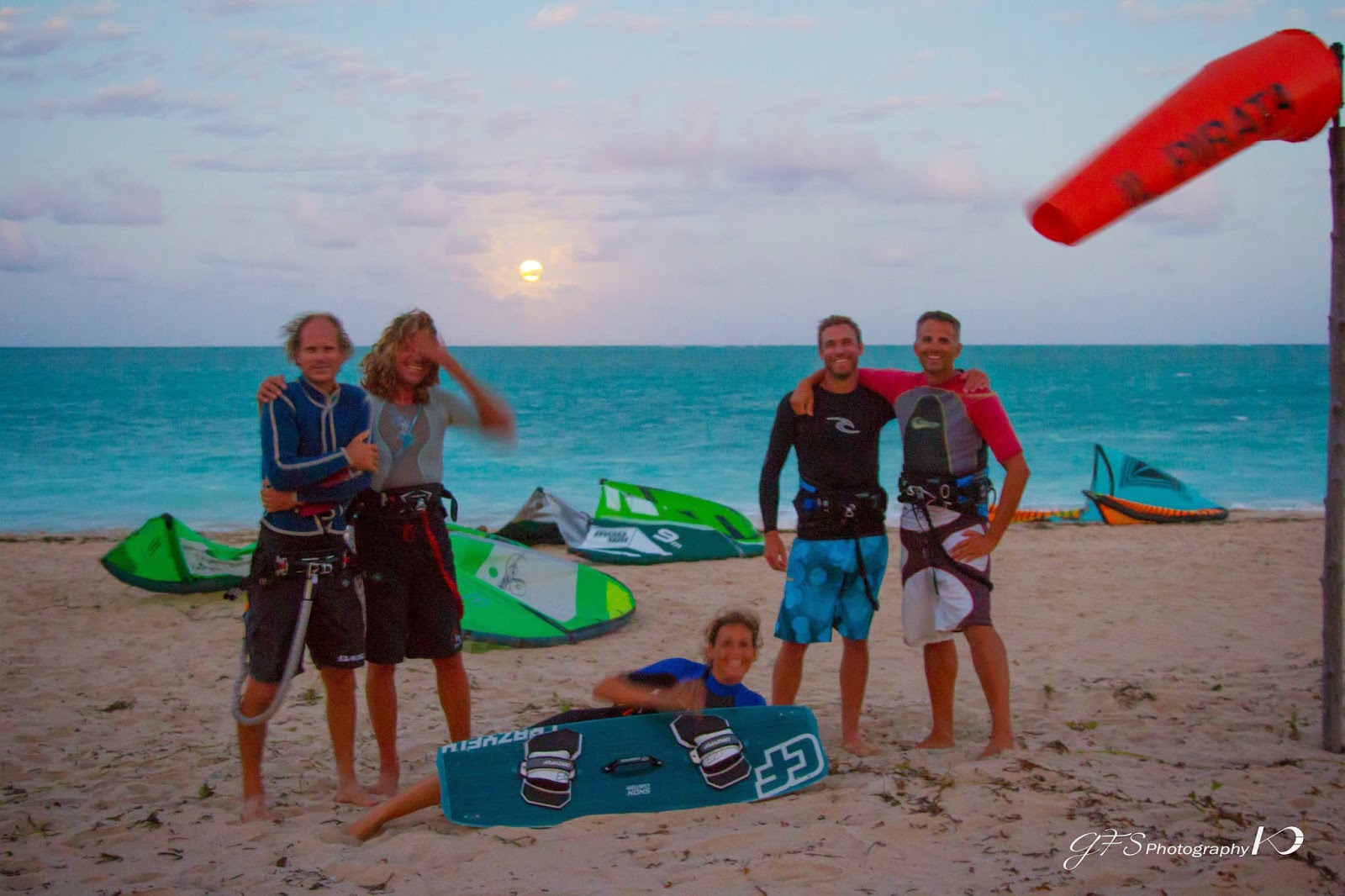 The special occasion was Red Moon night, when the moon appears to be slightly bigger and reddish in color, due to its close position to Earth.
The session started half an hour after the sunset when the remaining sunlight allowed us to set up all our kite gear, so we could be ready for the “battle”: the moon was low on the horizon, reflecting its strong light on the water surface, surrounded by a purple sky, fading into dark blue colors.
When everybody was ready, we started launching our kites, and I remained as the last, being the most experienced in self-launching, while all the kiters were starting to get familiar with the new and unusual kitesurfing environment. 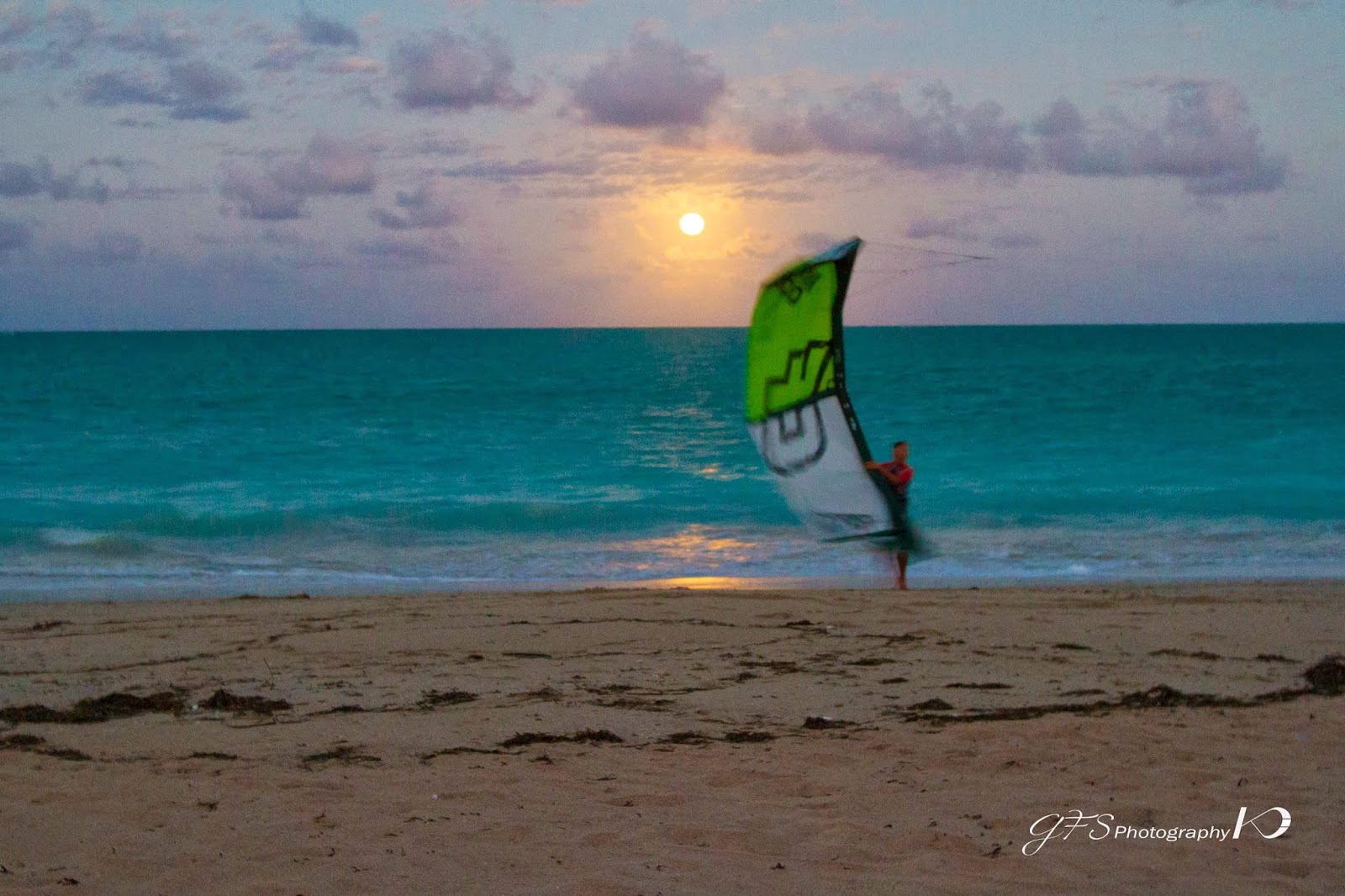 As soon as I got into the water, the feeling was great: the wind was gentle but consistent, allowing me to relax while performing my first tricks. The water was warm, with a soft, quiet, oily appearance, and the moonlight was so bright that I could easily see the other kiters in a range of one kilometer and even my lines heading up to the kite.
Even though not feeling very confident, I tried to perform a simple jump and landed it without a big effort. Realizing that I was in a very shallow lagoon, I decided to try more complex tricks and to my surprise, it was pretty much the same as if I was kitesurfing in sunlight. Of course, it was a bit difficult to measure how high my jumps were from the water surface, but in these easy conditions, I wasn’t preoccupied with that at all.
The atmosphere was magic and relaxing at the same time: all the kiters seemed to be riding silently and gently, respecting the special moment that could not be disturbed. 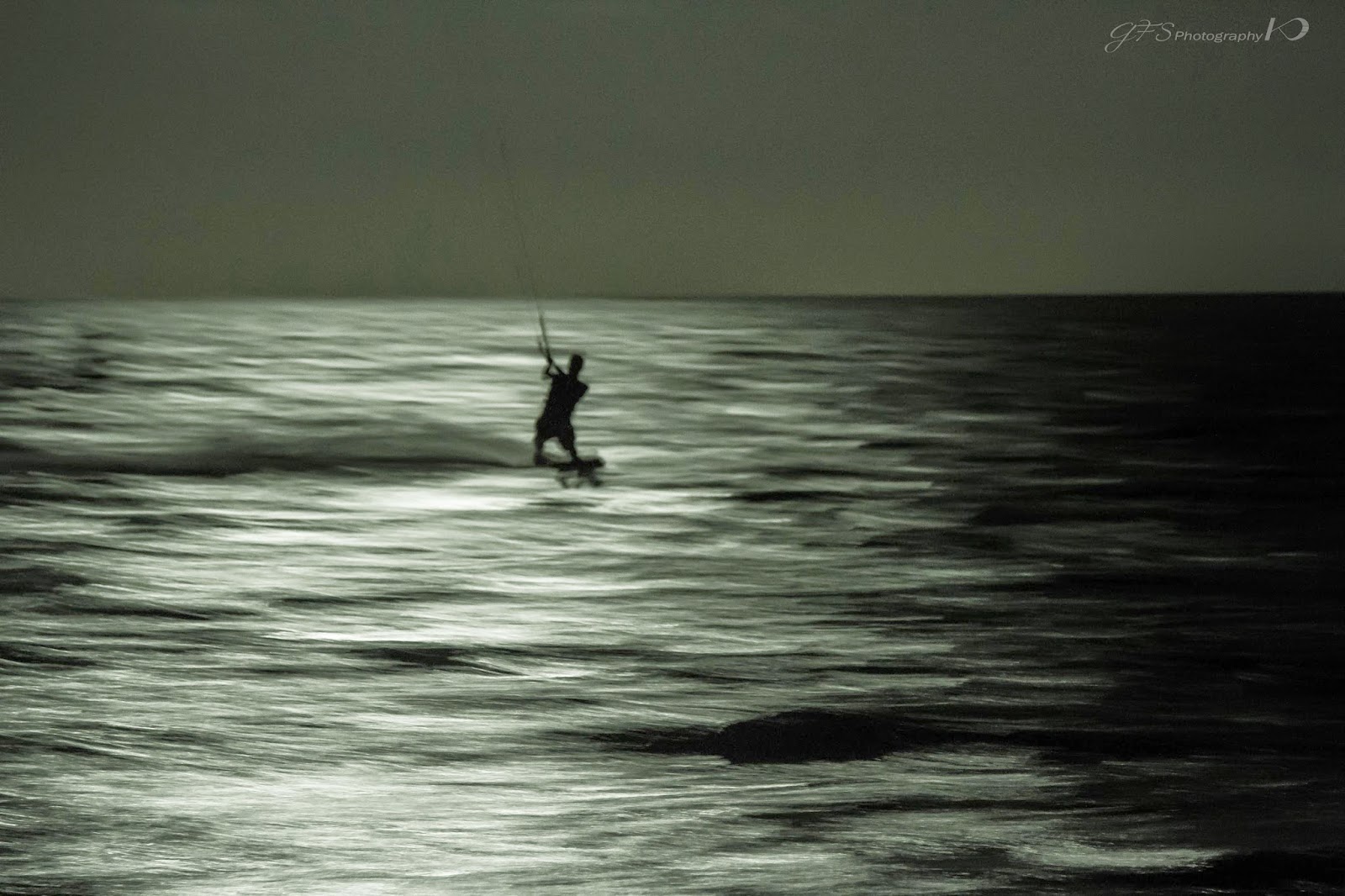 All of a sudden, I spotted a white sandbank in the center of the lagoon and decided to stop for a while to admire the surroundings. It felt like landing on the moon itself - the sand was reflecting the moonlight, and all I could hear was the sound of a gentle breeze and the sliding of kiteboards on the water.
There are few moments in the life of pure inspiration, and that was one for sure!
Time passed in a blink of an eye, and the kitesurfers’ strength began to fade as we were out for more than two hours with no break. One by one, slowly, we began approaching the meeting point on the shore, full of admiration for that fabulous new world that opened up for us, as we started landing our kites.
This is for sure one of the best kitesurfing memories I hold, and I suggest to everybody to try a full moon kitesurfing session if you have a chance.
In my next post, I’ll talk about some basic tips on how to approach such a particular kite session. 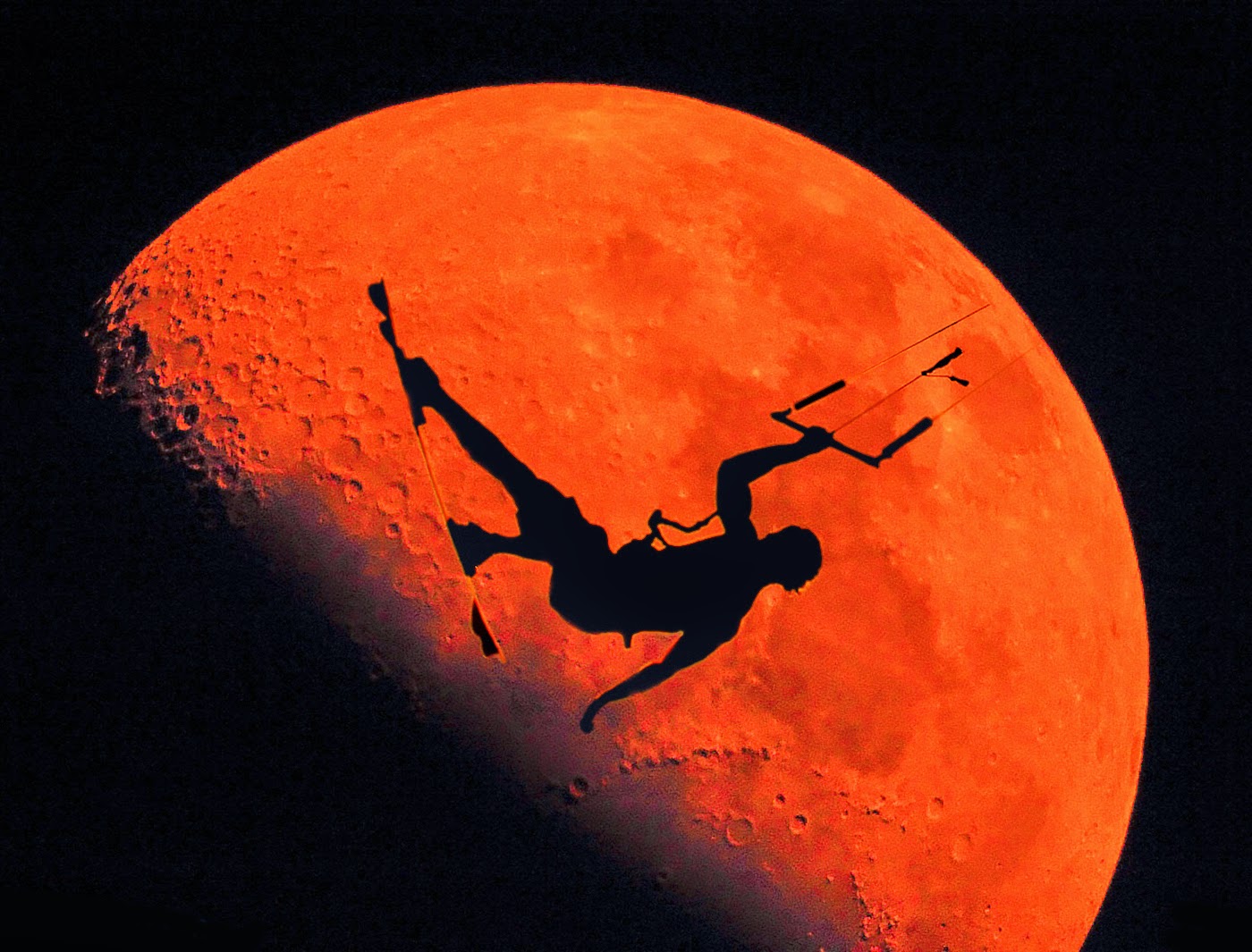 How to have a Night Kitesurfing Session: Safety Tips

How to have a Night Kitesurfing Session: Safety Tips


The Kite Bar: functions, evolution, components, and its safety