Have you ever considered these effects on the Wind Window behavior while kitesurfing?

Every kiter, approaching a professional kitesurfing lesson, will be introduced to the wind window. This well-known concept is fundamental for the understanding of how to handle a power kite and probably 99% of kiters are familiar with it.

Therefore, we won’t discuss the basics of this concept here, instead let’s focus on subtle nuances you might not be aware of, which directly impact the essence of the wind window and the kite behavior. 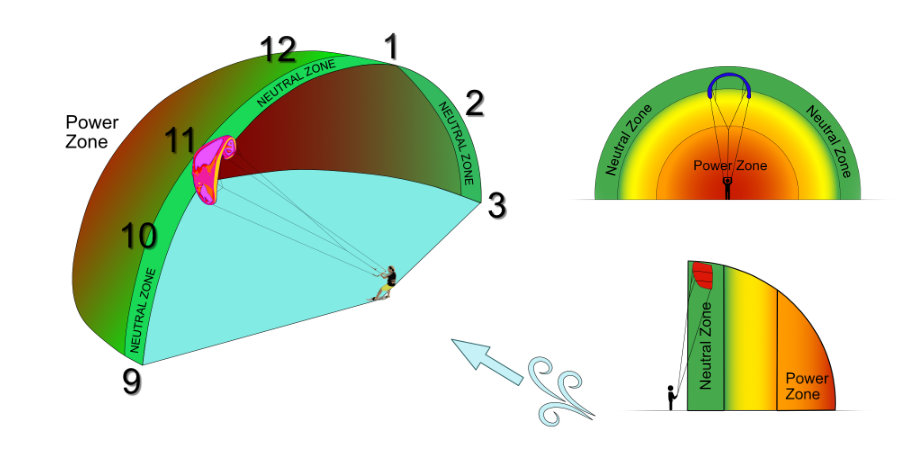 For sure everyone knows the wind window changes its orientation and dimension respectively according to the direction of the wind relative to the rider and the length of the kite lines.

But there at least 3 more subtle effects on the wind window that can affect the kite behavior and they are worth to be noticed:

1. The intensity of the wind

2. The roughness of the ground upwind to the position of the kiter

3. The effect of apparent wind

The intensity of the wind

On the opposite with strong winds, the power zone will increase its relative portion of the wind window and will push forward the neutral zone, making the kite reach a stable position way more ahead in relation to the rider. 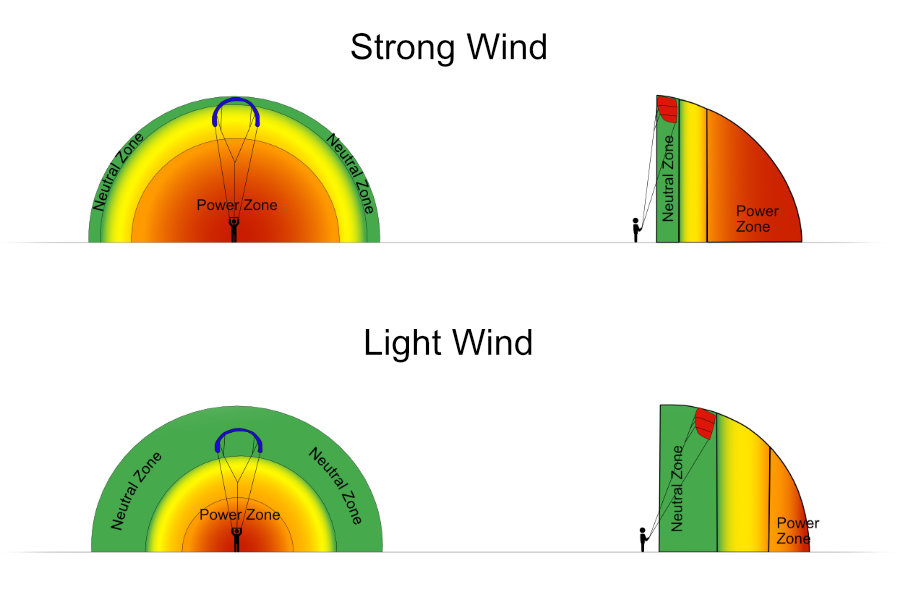 This effect naturally influences the use of the kite during our kitesurfing session. To reach the required power we will need to move more or less aggressively the kite in accordance with the specific distribution of the power zone and neutral zone.

The roughness of the ground

This case is very important when we are launching the kite (for this part you might also want to read our tips on kite launch and for the launch assistant).

If the wind intercepts obstacles upwind to our position, the wind window can sensibly be affected in its shape, having the lower parts shifted up, leaving areas where the wind doesn’t blow. In this case, to catch the wind for launching, the assistant should try to lift the kite a bit higher. 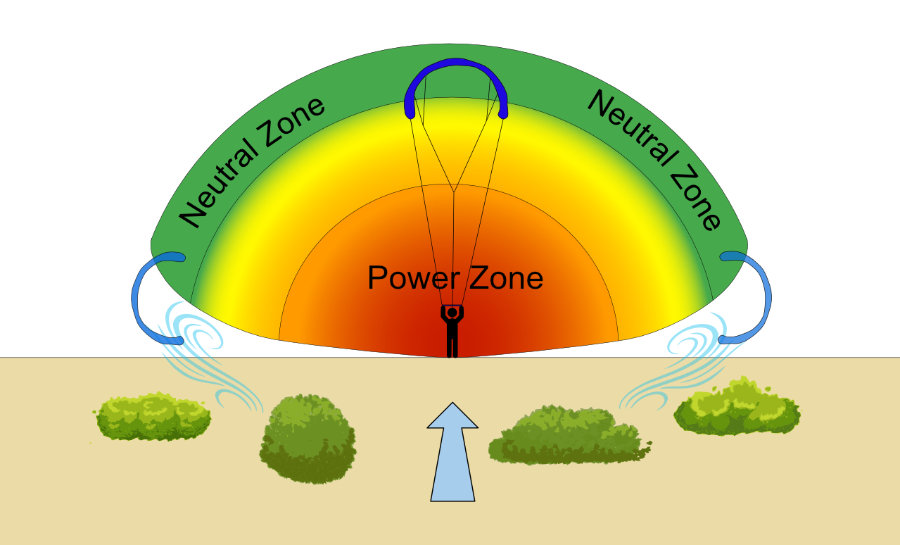 This effect is influential even if we are kitesurfing in the open sea, in the presence of big waves or other obstacles that shield part of the wind. In this case, it is probably wise not to fly the kite way to low, to avoid turbulences, avoiding to go below the wind window.

The effect of apparent wind.

The effect of the apparent wind is a well-known fundament of all wind water sports, including kitesurfing. It implies that when a sail moves, together with the ‘real’ component of the wind, a second component derived by the sail movement sums to increase the overall pressure on the canopy and therefore the power generated.
When we are riding, the kite is pushed by the ‘apparent wind’, which is the vector sum of the real wind and the wind generated by our speed. 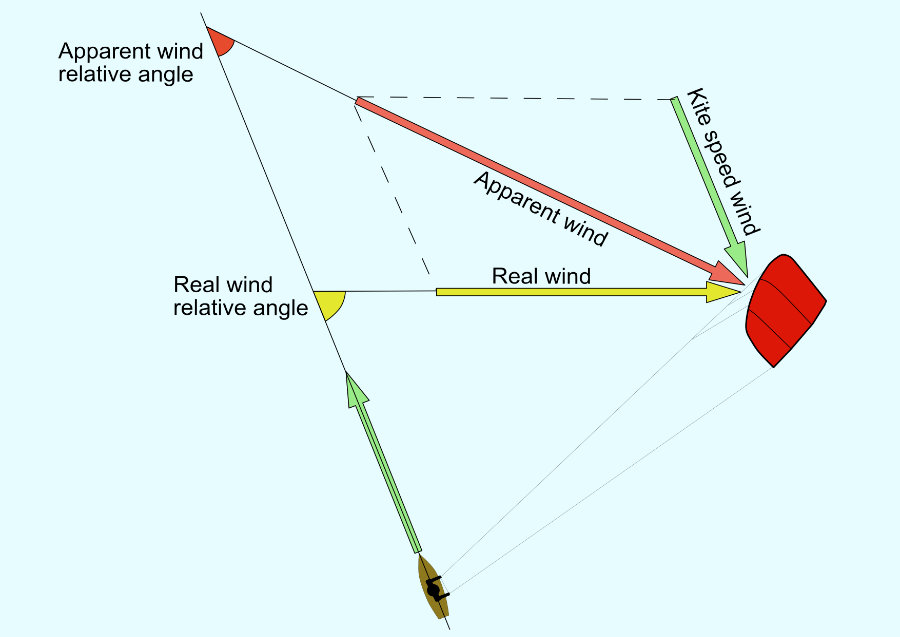 The effect of a vector combination changes the direction of the resulting apparent wind and as a consequence, the orientation of the wind window gets similarly affected.

We can notice this effect when riding and immediately stopping (as when we fall), the kite at the moment of our complete stop, flies ahead to reach the new position of the neutral zone, which is its natural equilibrium position. 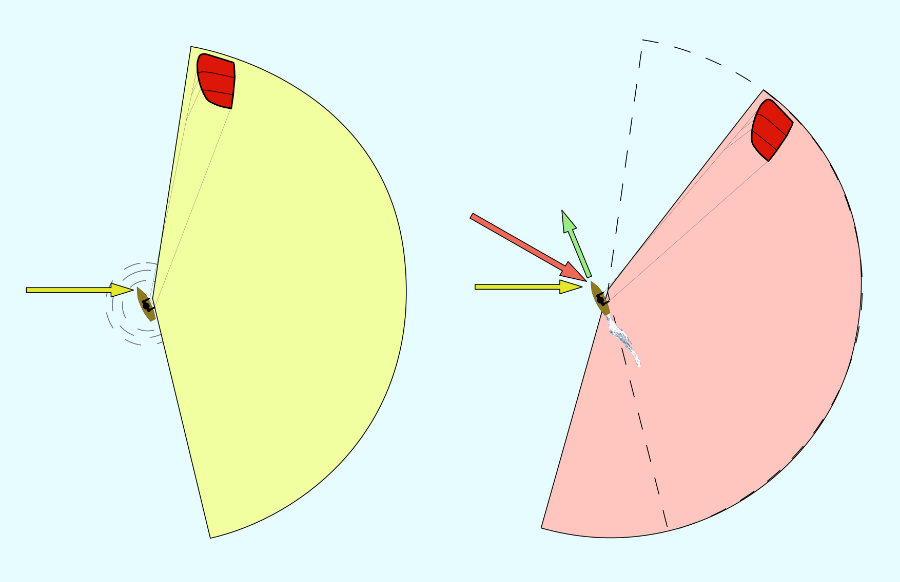 This last effect has normally little consequences on our riding experience, but it is worth to be mentioned. Many think that, when we are riding, the kite sets backward and stays there in balance in a deeper section of the wind window, towards the power zone.

The idea is that here it hits partially in the power zone to deliver the lift needed to advance.

In reality, it just sets on the neutral zone on the newly generated apparent wind window, taking advantage of the increased power zone dimension due to the stronger apparent wind component, as explained in the first point.

Let’s keep this in mind when riding close to obstacles (which is never a good idea) if we suddenly stop, we might see the kite unexpectedly advance from where it was staying when we had some speed.

So, have you ever paid attention to these subtleties of wind window behavior? Do you agree with it? Did you experience any of the effects we talked about? Let us know in the comments below.

As a snowkiter, riding terrain, the power zone will shift depending upon the slope angle. Steeper mountains have a dramatically “higher” wind window. Failure to recognize this can result in unfortunate outcomes. Knowing this can improve outcomes.

Thank you, Noah, for your insight. It would be great to hear more about this aspect of the wind window... Maybe it could result in a separate blogpost with your collaboration. would you be interested?